We put the patient first
How to get started
1. Access our secure portal to safely discuss your health information.
2. Fill a non-commitment form in the secure portal about your condition and preferences.
3. Our scientific team will evaluate your case and we will contact you with an offer.
read more about Coremine Vitae
Thank you! Your submission has been received!
Oops! Something went wrong while submitting the form. 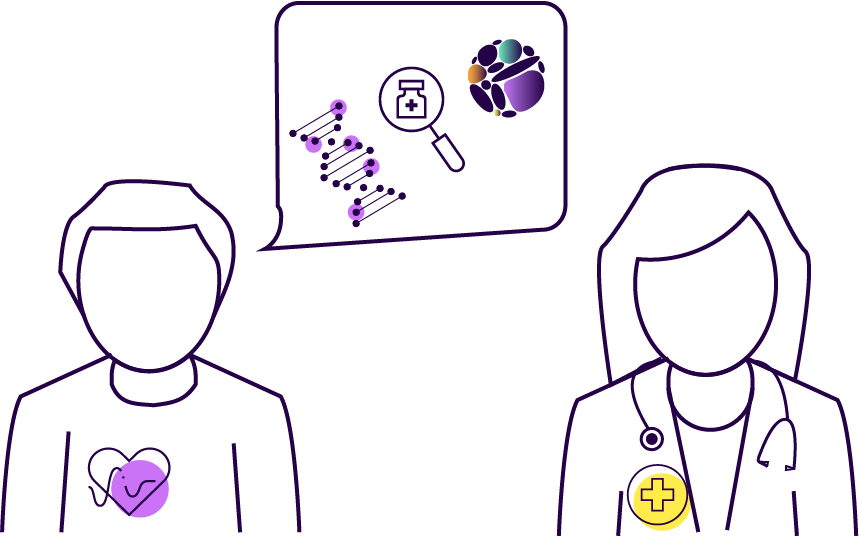 You may wonder, why hasn’t my doctor mentioned immunotherapy? You have probably heard that immunotherapy is a breakthrough in cancer treatment. You may know that former president Jimmy Carter was miraculously cured from skin-cancer spread to his liver and brain. And you might also be aware that the inventors of immunotherapy received a Nobel prize for their work in 2018.

So then, why isn’t immunotherapy the go-to treatment for people with cancer? It turns out that, even though there is the potential for people to be cured even from advanced cancer, according to  Hopkins Medicine most patients don’t benefit from immunotherapy.

Consider immunotherapy as an option when the more conservative moves haven’t produced results.

Terms like “metastatic” and “unresectable” appear in the descriptions of their use. The good news is that immunotherapy can provide a cure, even if it is a long shot.

To understand immunotherapy, consider that it works by interfering immune regulation. But what are we actually talking about when we say “the immune system” and what is “immune regulation”? Something like the military, the immune system is made up of several branches that support and rely on one another to provide defence. In the immune system, T-cells form one branch. T-cells have the function of interrogating and potentially killing other cells. What the inventors of immunotherapy figured out is that T-cells can be “tweaked” to allow them greater freedom to act and possibly destroy tumour tissue.

There are several immunotherapy drugs now available in most countries that may fit your situation. The table below shows immunotherapies (specifically “checkpoint inhibitors”) 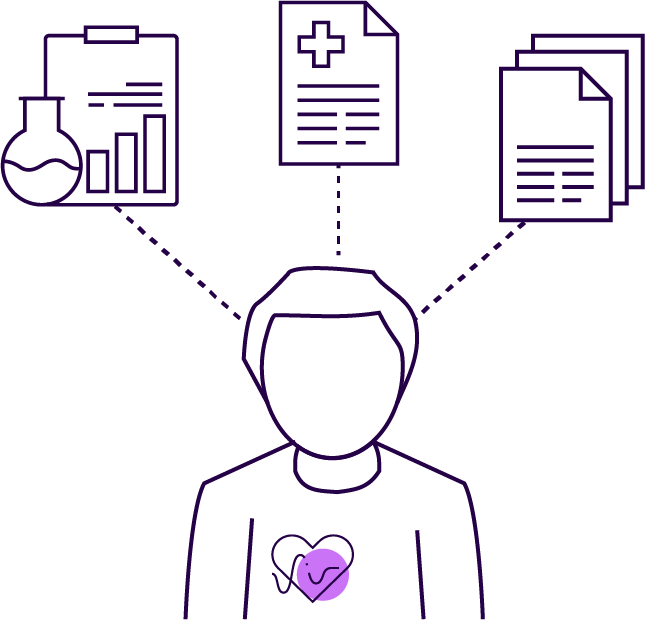 The question then is, why are T-cells regulated in the first place?

Again, like the military, defences are mobilized under orders to discriminate between friend and foe. T-cells are negatively regulated when they meet cells that carry a “flag” that identifies them as friendly. These “flags” are proteins normally expressed on the surface of “self” cells – the cells of your body. Ideally, T-cells only attack “non-self” cells.  If T-cells were fully unregulated, well that would not be good.

There are several immunotherapy drugs now available in most countries that may fit your situation. The table below shows immunotherapies (specifically “checkpoint inhibitors”) and the types of cancer they treat. Note that two of these are used to treat solid tumours in general, but the catch is, the label says the cancer must show a certain type of genetic alteration to match the criteria. For each immunotherapy drug, there is some limiting requirement specified in the label, often regarding the results of a molecular test.

These complications aside, there are a lot of cancer cases being treated with immunotherapy. The most used immunotherapy is Merck’s Keytruda (Pembrolizumab). Merck has invested heavily in Keytruda through its “Keynote” trials. They have sponsored more than 160 clinical trials to test Keytruda on different forms of cancer and in combination with other cancer therapies. 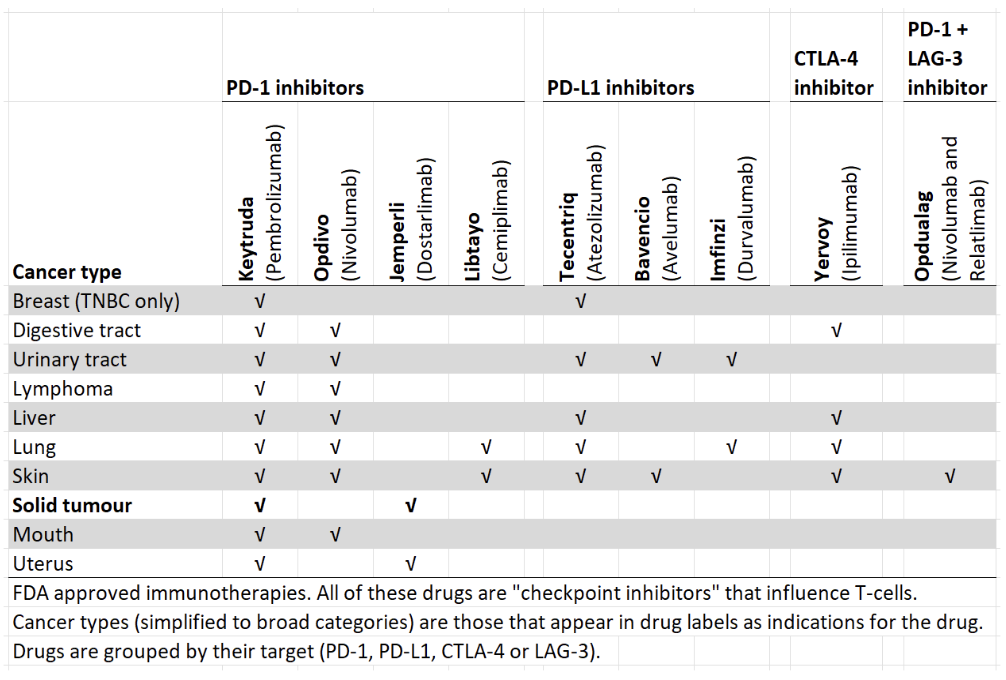 Although all checkpoint inhibitors work by “taking the breaks off” of T-cells, they do work by slightly different mechanisms.

Bristol Meyers Squibb’s Yervoy (Ipilimumab) was the first checkpoint inhibitor to be FDA approved (2011). Yervoy binds to and inhibits the CTLA-4 protein on T-cells. The action of T-cells is regulated by “flags” presented by the cells they might attack. CTLA-4 is one of the proteins that T-cells use to recognize “don’t kill me” flags the cells under interrogation.

Since Yervoy was approved, there has been a race among drug companies to exploit these various checkpoints to allow T-cells to kill cancer. There are more that ten checkpoint proteins expressed on T-cells, including PD-1. In 2014, Merck and BMS were in a neck-and-neck race to be first to market with a PD-1 inhibitor. Merck won the race and was FDA approved to sell Keytruda in September. Immunotherapy pioneer BMS didn’t get Opdivo approved until December.

The next part of the race to make different (and perhaps better) checkpoint inhibitors was to target the “don’t kill me” flags (proteins) on cells that T-cells attack. One such “don’t kill me protein” is PD-L1. This became the next hot target for drug makers interested in getting a piece of the immunotherapy action. In 2016 the FDA approved Tecentriq (Atezolizumab, Roche) the first PD-L1, followed by Bavencio (Avelumab, EMD Serono) and then Imfinzi (Durvalumab, AstraZeneca) both in the spring of 2017.

Checkpoint inhibitors are by far the most successful approach to immunotherapy devised so far. But they are not the only approach.

Until 2022, T-cell proteins CTLA-4 and PD-1 and “cancer cell” protein PD-L1 were the targets of all FDA approved checkpoint inhibitors. BMS has since added one more target to the list: T-cell protein LAG-3. Note that LAG-3 has not been approved alone, but in combination with PD-1 inhibitor Opdivo to treat melanoma.

The approval of the LAG-3 plus PD-1 inhibitor combination as the product Opdualag (Relatlimab plus Nivolumab) underscores that drug makers are interested in synergistic approaches in this arena. Another example of synergistic use of two checkpoint inhibitors is the FDA approval to use CTLA-4 inhibitor Yervoy in combination with Opdivo to treat various kidney, colon, liver and lung cancers.

Treatment synergy has also been established between immunotherapy and other anti-cancer measures. Many of the approved indications for Keytruda specify its use in combination with platinum based or other cytotoxins. Similarly, simultaneous treatment with Lenvima (Lenvantinib, a kinase inhibitor) is a requirement specified for using Keytruda on certain kidney and uterine cancers.

Drug makers continue to try immunotherapy by checkpoint inhibition on other forms of cancer and in combination with other therapies. For example, Keytruda is in ongoing and recruiting trials to test its efficacy in treating prostate cancer.

Checkpoint inhibitors are by far the most successful approach to immunotherapy devised so far. But they are not the only approach.

Ask a scientist section was created to help individuals understand the basics of science, scientific research, medicine and more. 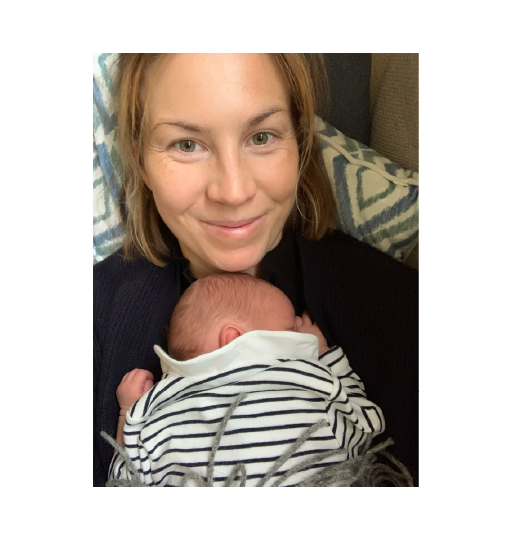 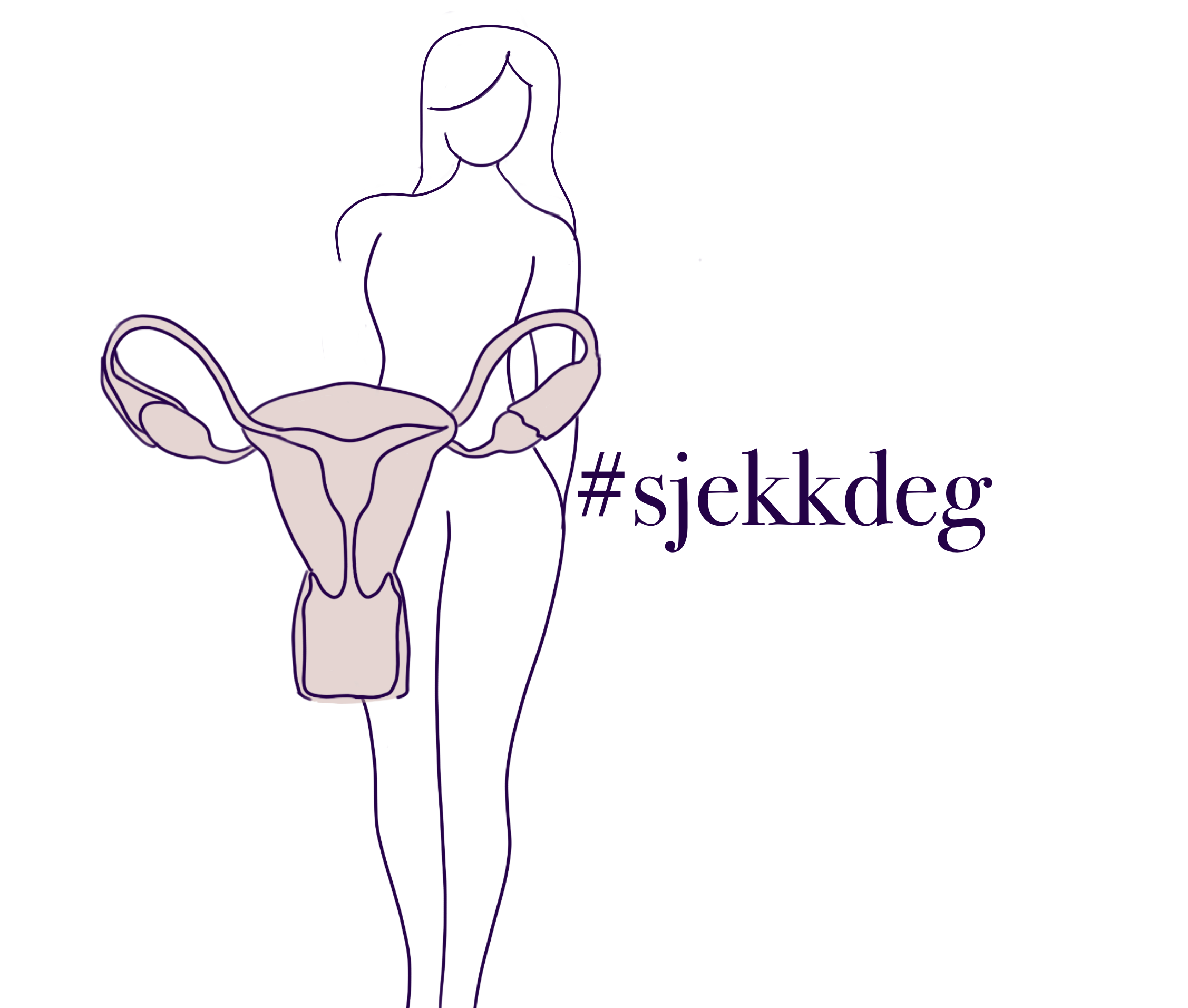 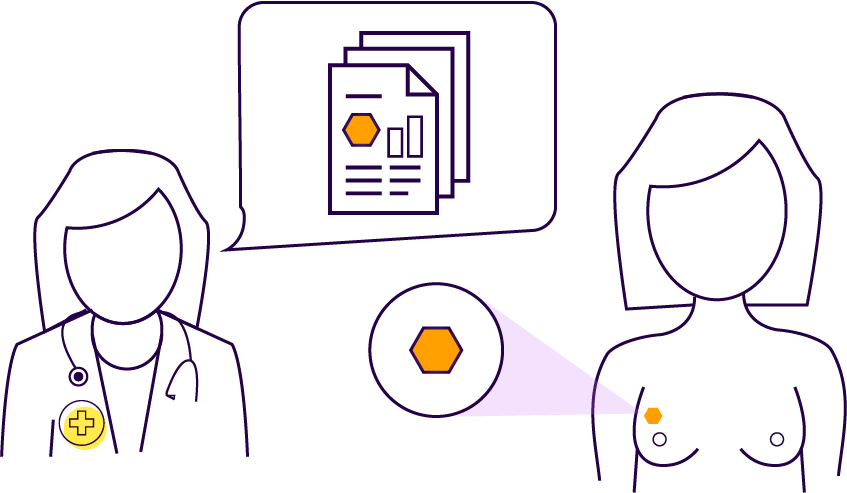